Debbie posed a question about Hoppy artwork on our “Favorite Places” page. Our own David Hunter did a lot of research worthy of its own post, so here it is.

QUESTION: I’m new to your site. My husband and I are B-Western fans, especially Hoppy movies. I am looking for the identification of the artist who did many of, what appears to be, the pencil drawings during the opening and closing credits of Hoppy films. I have had no luck. If anyone knows or can give me any web leads I’d be most grateful!

ANSWER: I’m not exactly sure of which artwork is being referenced but here is my research to try to answer the question. After questioning Hank Williams who is an authority on everything “Hoppy” and also the U.S. Television Office, Inc. which holds ALL of the Hopalong Cassidy rights., we have concluded the following info. 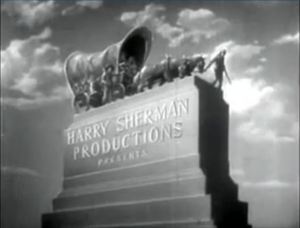 Harry “Pop” Sherman produced 41 “Hoppy” features between 1935 and 1941. The original prints carried the “Sherman Production” logo which was an oxen-drawn wagon atop Inscription Rock. This is believed to have been drawn by Sherman’s Daughter who had many roles in her father’s studio. These 41 features were distributed by Paramount and often carried Paramount’s artwork. In 1941, Sherman moved to United Artist for distribution and released 13 “Hoppy” films with UA artwork (1941 – 1946). Between 1946 and 1948, William Boyd acquired all rights to the character “Hopalong Cassidy” and all of the existing films. From 1946 to 1948, Boyd made 12 “Hoppy” features with Andy Clyde and they were distributed by United Artist. 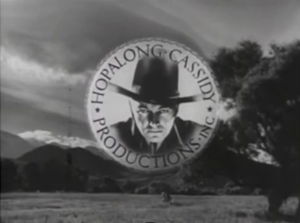 These films had a logo that was designed By a staff member at William Boyd Enterprises and consisted of a head shot of Hopalong Cassidy (Boyd) in a circle. It was placed in the upper right corner of the title frame. Boyd Created 52 episodes of TV shows between 1950 and 1954 and they also used the circle logo.

William Boyd died in 1972 and as a result of his estate settlement, U.S. Television Office Inc. was created to handle the legal issues of the Hopalong Cassidy brand. The U.S. Television Office, Inc. proceeded to acquire ALL, and I do mean ALL, rights from the Mulford Estate and Boyd Estate to EVERYTHING related to Hopalong. This included the wordmark of the name “Hopalong Cassidy!” 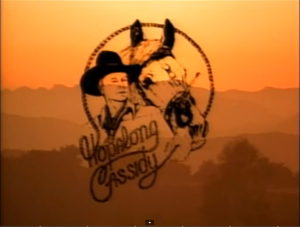 In 2008, the U.S. Television Office, Inc. made a deal with Encore Westerns Channel to show the entire library of 66 “Hoppy” features. When the U.S. Television Office, Inc. prepared the films to be shown on TV they added art work by one of their staff artists (the name is unfortunately unavailable, but the rights remain with USTO). This is the art work in question (I think). It consists of a beautiful sunset with a logo of “Hoppy” and Topper surrounded by a rope lariat frame. The USTO also added the “Here He Comes” music intro at this time.

In 2012, the USTO abruptly withdrew the films from the Encore Westerns Channel. In 2013, USTO created Sagebrush Enterprises to do the web pages and release the films on DVD. They also have released the 52 TV shows in two sets including one with 10 “Hoppy” feature films. The rest of the films are available in 5-6 sets of titles. They just released the last 10 films in the fall of 2014 so, at last, you can now own the entire set of feature films and TV shows.

I hope this has been helpful in answering the question.