It’s time to saddle up and mosey over to the McKimmon Center at NCSU for another BIG western show and we’ve got two great films for you. 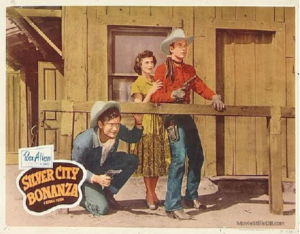 Second, we’ll view one of Randolph Scott‘s best films, The Gunfighters (Columbia, 1947) also starring Barbara Britton, Dorothy Hart and Bruce Cabot. Directed by George Waggner. This movie will be shown in glorious Cinecolor and was filmed in beautiful Sedona Arizona. You will really like this excellent print which has been restored to its original brilliance.